Panic over the summer holidays and the anxiety that ensues is like clockwork for us, the GovCon-obsessed. The calendar flips to July and BOOM—pipelines are brought back from the dead, emails start flying, and proposal war rooms dissolve into organized chaos. No one in GovCon is a stranger to these seasonal trends, and every year it feels like we are all counting on a little extra Q4 magic.

The end of the fiscal year is often met with hyperbolic headlines. You see them every year:

But panic aside, is the Q4 hype real? The Pulse did some research to find out.

Short answer – it hasn’t been for a few years, yet the rhetoric has stayed the same, if not more intense.

Objective: The Pulse has made it our mission to track reported contract data from the fourth quarter of the most recent Fiscal Years. We aim to update this piece in December of every calendar year to keep it accurate. When we first wrote this article, The Pulse analyzed Q4 spending statistics between fiscal year (FY) 2014 through 2018. We analyzed this data to determine general Q4 trends and identify the who, what, when, and how of Q4 spending. Next, we examined current FY spending thus far, including isolating Q4 data, to develop a realistic picture of how much the Federal Government (FedGov) discretionary money has been spent in that FY. Last, we compared FY data to the general Q4 spending trends we found. All data was mined from FPDS and Data Lab.

Here are our results & FINDINGS

USASpending.gov has given itself a makeover and now has a useful counterpart (and our favorite toy) the Data Lab. The information provided in Data Lab isn’t exactly groundbreaking, but it is helpful as another tool in the dissection of FedGov spending.

Relevant to our research, Data Lab found “seasonal trends in contract spending occurring within a single year. [Data Lab] looked at weekly spending on federal contracts, and found that spending tended to rise and fall on a monthly cadence, with roughly one small peak and one small drop per month. In addition, contract spending spiked in September, one week prior to the end of the government’s fiscal year.”

Based on this, we can see that FedGov spending does spike in Q4 – but how can GovCons use this data to save time and accurately focus their Q4 engagement? 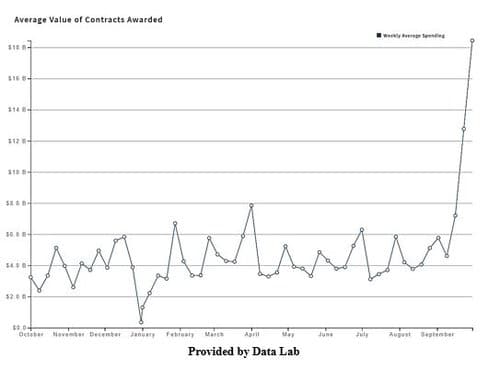 To answer these questions, The Pulse focused on the when, who, what, and how of Q4 spending to determine Q4 spending trends.

The Pulse evaluated the identified “contractor type” under all Q4 awards in order to assess what type of GovCons get the most attention in Q4. Our findings here are not groundbreaking. It is no surprise that Large GovCons get the biggest percentage (more than half) of the Q4 spending budget.

The Pulse analyzed the spending under the FedGov defined products and services categories, to include both the Product Service Code (PSC) and North American Industry Classification System (NAICS), to discover what your FedGov customers are buying the most, and the least, of in Q4. By understanding what products or services the FedGov is buying, you can determine if your offerings are enough to convince that customer to break out their Government purchase cards before the new (fiscal) year.

Here is our summarized comparison of the Q4 obligations per PSC Category through FY14 – FY19:

Here is our summarized comparison of the Q4 obligations per NAICS through FY14 – FY19:

The Pulse analyzed single vehicle awards, multiple vehicle awards, purchase card awards, and other transactions to understand how the FedGov is buying. By understanding how they are buying, you’ll be able to determine if you have the right tools in place to make a quick sale.

Vehicle Spending: In Q4, Single Awards – whether a delivery order, IDIQ, etc. – are the favorite by far. Surprised? So were we.

The end of each Fiscal Year is a lot like the end of the calendar year; a whole lot of hype with only a few people awake at midnight to reap the rewards.

Based on our research, we believe high expectations will only lead to low disappointments, and your P&L can’t be dependent on that final moment when the ball finally drops. However, if you’re armed with some proper planning, an understanding of the Q4 trends, and little research – you can make a (fiscal) new year’s resolution and get that new Fiscal Year pipeline into shape!

On June 19th, The Pulse of GovCon and Eastern Foundry teamed up to facilitate an open and honest discussion on what it takes to be successful in not only hiring a Business Development professional, but also in performing business development functions in this highly competitive environment.

It’s easy to forget about the second “A” in the acronym (National Aeronautics and Space Administration) but this buzzword should be in the forefront of the Government Contractors mind.

Government Contracting During a Pandemic

From the desk of Ryan Bradel, Partner at Ward & Berry PLLC, here is what contractors need to know about government contracting during a pandemic.