The countdown to the (fiscal) new year has begun – we are a mere 54 days away from Fiscal Year 2020 – so The Pulse wanted to take a moment to reflect how Fiscal Year 2019 has progressed, analyze what Q4 will hold, and begin to prepare for Fiscal Year 2020 .

To REFRESH – a total of $1.23T was officially allocated by the 12 Appropriations Committees for Fiscal Year 2019. 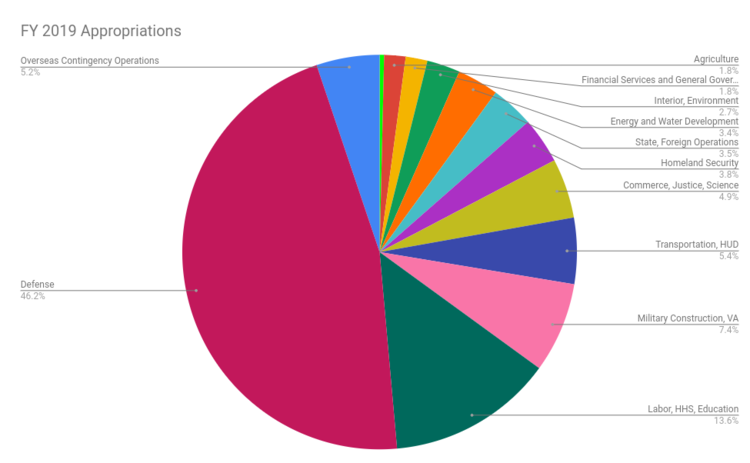 So how if Fiscal Year 2019 progressing?

The Pulse collected the monthly obligations throughout Fiscal Year 2019 and compared it to the past three fiscal years. Keep in mind these metrics are displayed with a lag of 90 days so we need to account for delayed departmental data. With that being said, it looks like March 2019 has proved to be the most expensive month of Fiscal Year 2019 so far for the Federal Government; but when compared to the past fiscal years October through February seems to set new records.

OTA’s may be all the rage these days, but they only account for 1% of the total federal obligations thus far, according to FPDS. It is important to note that not all OTA spending is put into FPDS as some are similar to FSS obligations.

Good news! So far 63% of all federal obligations have been competed this fiscal year. However, about 31% of all federal obligations have been to bundled and consolidated requirements. That means that even though the Federal Government has been competing requirements in more than half the time – they have also been diminishing competition by effectively excluding firms who can only perform a portion of the procuring activity’s requirements.

For the sake of time, The Pulse just pulled the Top 200 beneficiaries of Fiscal Year 2019 federal obligations so far. For the full list, click here.

What about socio-economic spending? So far in Fiscal Year 2019, Large Businesses have seen 73% of the total federal dollars, whereas Small Businesses have only seen 19%. There are several reason we can attribute for this, including 31% of all federal dollars going to consolidated and bundled requirements. For a breakdown of how much each Federal Agency has obligated across each socio-economic category, click here.

The favorite NAICS of Fiscal Year 2019 has so far been for – surprise – materials. NAICS 33 represents requirements for metals, machinery, computer, electronics, electrical transportation equipment, and furniture, and makes up 34% of total federal obligations to date.

The favorite PSC of Fiscal Year 2019 has been 1 (Products) – shocking. With 19% of total federal spending thus far, we can safely anticipate that this PSC’s stock will continue to rise throughout the rest of the fiscal year.

Right now, Federal Government Q4 spending accounts for 4% of all total Fiscal Year 2019 obligations. As we covered in our Q4 Federal Spending Statistics article – we found that FY14 through FY18 averaged obligating around 68% of their GovCon-specific discretionary funding prior to the start of Q4. Leaving at least an average 30% of all fiscal year funds available to GovCons for the Q4 sprint.

For Fiscal Year 2019 – we seem to be on a [slower] track. Out of the ten largest projected discretionary spending levels – only one Federal Agency has spent over 50%.

Outside of ten largest – only the National Aeronautics and Space Administration (NASA), General Services Administration (GSA), and State Department (DOS) have spent more 50% of their appropriated spending levels.

So far, the biggest spenders in Q4 Fiscal Year 2019 have been:

When compared to Fiscal Year 2018, there are only a few Federal players missing from this table. We can anticipate Department of Defense (DoD) taking the lead at the end of this Q4 with Veterans Affairs (VA) and Health and Human Services remaining in the other top two spots.

The Pulse analyzed single vehicle awards, multiple vehicle awards, purchase card spend, and OTA obligations to understand how the Federal Government is buying. By understanding how they are buying, you’ll be able to determine if you have the right tools in place to make a quick sale. So far in Q4 Fiscal Year 2019, the Federal Government is trending in the same direction as its previous years with single awards in the lead.

As we covered in our Q4 Federal Spending Statistics article -we analyzed the spending under the Federal Government defined products and services categories to discover what your Federal Government customers are buying the most, and the least, of in Q4.

In just September of Fiscal Year 2018, the Federal Government spent $108B in under four weeks. In those four weeks, the obligations were split 56% Service PSCs, 39% Product PSCs, and 6% Research and Development PSCs.

By understanding what products or services the FedGov is buying, you can determine if your offerings are enough to convince that customer to break out their Government purchase cards before the new (fiscal) year.

PSC Spending: Out of the five fiscal years we look at in our Q4 Federal Spending Statistics article – we discovered a split between the old and the new:

Fiscal Year 2019 seems to be trending towards the old school PSC favorites with R (Services, Other than R&D) in the lead with $3.6B spent in Q4 so far.

NAICS Spending: Out of the five fiscal years we examined, the NAICS that received the most love in Q4 is NAICS 54 (Professional, Scientific, and Technical Services). Fiscal Year 2019 is falling right in line with 54 (Professional, Scientific, and Technical Services) in the lead with $7.4B spent in Q4 so far.

The end of the fiscal year is a lot like the end of the calendar year; a whole lot of hype with only a few people awake at midnight to reap the rewards.

A lot of industry consultants and publications are starting to release their concepts of Federal Government spending trends – and they do this with limited or unsubstantiated data. The Pulse wants you to be informed, and to take some of the click-bait you see with a grain of salt. When you have the full picture, you are better equipped to see the forest for the trees, and align your strategy to where you fit. Armed with some proper planning, an understanding of the Q4 trends, and little research – you can make the most out of the end of this fiscal year and begin to get your Fiscal Year 2020 pipeline into shape!

*A note on FPDS.gov: The Federal Procurement Data System—Next Generation (FPDS)—is a central database of U.S. government-wide procurement. FPDS generally reports information on contracts that exceed the micro-purchase threshold, defined in 48 C.F.R. §2.101. 3 The micro-purchase threshold is generally $10,000 (meaning that contract actions above this amount must be reported to FPDS). FPDS does not include data from judicial branch agencies, the legislative branch, certain DOD components, or select executive branch agencies—such as the Central Intelligence Agency and National Security Agency. Unless otherwise indicated, all data in this report are derived from FPDS. Decision makers should be cautious when using obligation data from FPDS to develop policy or otherwise draw conclusions. In some instances, a query for particular data may return differing results, depending on the parameters and timing.