Grab your noisemakers and funny hats, because the countdown to the (fiscal) new year has begun! Unless you’ve been lying on a beach somewhere (jealous), you’ve probably been inundated with industry alerting you that we are a mere 60 days out from FY19.

This panic over the summer holidays and the anxiety that ensues is like clockwork for us, the GovCon-obsessed. The calendar flips to July and BOOM—pipelines are brought back from the dead, emails start flying, and proposal war rooms dissolve into organized chaos. No one in GovCon is a stranger to these seasonal trends, but this time it feels like we are all counting on a little extra Q4 magic. Naturally skeptical as we are, we felt compelled to do a little digging to find out if the Q4 hype is real.

Our Question: Will Q4 FY18 be the biggest spending spree industry has seen yet?

Our Method: To answer this question, The Pulse first analyzed Q4 spending statistics between fiscal year (FY) 2014 through 2018. We analyzed this data to determine general Q4 trends and identify the who, what, when, and how of Q4 spending. Next, we examined FY18 spending thus far, including isolating Q4 FY18 data, to develop a realistic picture of how much the Federal Government (FedGov) discretionary money has been spent in FY18. Last, we compared this FY18 data to the general Q4 spending trends we found. All data was mined from FPDS and Data Lab.

Our Results: Intriguing. We hope that this data provides GovCons with some insight as to how they should be planning for the upcoming Q4’s.

In case you missed it, USASpending.gov has given itself a makeover and now has a useful counterpart (and our new favorite toy) the Data Lab. The information provided in Data Lab isn’t exactly groundbreaking, but it is helpful as another tool in the dissection of FedGov spending.

Relevant to our research, Data Lab found “seasonal trends in contract spending occurring within a single year. [Data Lab] looked at weekly spending on federal contracts, and found that spending tended to rise and fall on a monthly cadence, with roughly one small peak and one small drop per month. In addition, contract spending spiked in September, one week prior to the end of the government’s fiscal year.”

Based on this, we can see that FedGov spending does spike in Q4 – but how can GovCons use this data to save time and accurately focus their Q4 engagement? 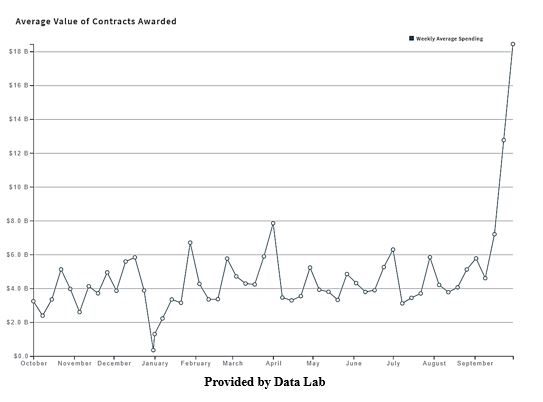 To answer these questions, The Pulse focused on the when, who, what, and how of Q4 spending to determine Q4 spending trends.

The Pulse looked at the percentage of FedGov total fiscal year obligations and compared it to just the Q4 obligations made during the respective fiscal year. The benefit of understanding how much is obligated in totality versus funding obligated just during Q4 can assist you in identifying how much of the funding pie is typically left for Q4, and what your actual shot is at getting a piece of the remaining bits. What we found was that FY14 through FY18 each averaged obligating around 68% of their GovCon-specific discretionary funding prior to the start of Q4. Leaving at least an average 30% of all fiscal year funds available to GovCons for the Q4 sprint.

The Pulse evaluated the identified “contractor type” under all Q4 awards in order to assess what type of GovCons get the most attention in Q4. Our findings here are not groundbreaking. It is no surprise that Large GovCons get the biggest percentage (more than half) of the Q4 spending budget.

The Pulse analyzed the spending under the FedGov defined products and services categories, to include both the Product Service Code (PSC) and North American Industry Classification System (NAICS), to discover what your FedGov customers are buying the most, and the least, of in Q4. By understanding what products or services the FedGov is buying, you can determine if your offerings are enough to convince that customer to break out their Government purchase cards before the new (fiscal) year.

PSC Spending: Out of the five fiscal years we looked out, the PSC Category that received the least amount of love in Q4 is PSC Category: E (Physical Sciences).

Here is our summarized comparison of the Q4 obligations per PSC Category through FY14 – FY18:

NAICS Spending: Out of the five fiscal years we examined, the NAICS that received the most love in Q4 is NAICS 54 (Professional, Scientific, and Technical Services).

Opposite of NAICS 54 is NAICS 55 (Management of COmpanies and Enterprises) serving as the least favorite of Q4 spenders:

Here is our summarized comparison of the Q4 obligations per NAICS through FY14 – FY18:

The Pulse analyzed single vehicle awards, multiple vehicle awards, purchase card awards, and other transactions to understand how the FedGov is buying. By understanding how they are buying, you’ll be able to determine if you have the right tools in place to make a quick sale.

Vehicle Spending: In Q4, Single Awards – whether a delivery order, IDIQ, etc. – are the favorite by far. Surprised? So were we.

FY18 Spending So Far and How it Compares

On March 23rd, President Trump signed the Consolidated Appropriations Act of 2018 into law —a comprehensive appropriations measure that funded the FedGov $1.3T through the remainder of FY18. Almost seven months late. The budget deal included new budget caps increased by $143B in FY18 above current spending levels. Furthermore, the Omnibus Bill increased the 80/20 spending rule to allow for 25% of all spending to occur in the last month of the fiscal year.

UPDATE (Dec. 29, 2018): According to FPDS, the FedGov obligated $561B to GovCon in FY18. Out of the ten (10) largest FedGov spenders, only four (4) spent more than 50% of their then allocated discretionary FY money. In short, that means a lot of money was left on the table this past fiscal year.

We decided to do some digging to see what GovCon’s (small & large) benefited specifically from the Department of Defense’s Q4 FY18 spending and provided you with the Top 10 list.

The end of FY18 was a lot like the end of the calendar year; a whole lot of hype with only a few people awake at midnight to reap the rewards.

Based on our research, we believe high expectations will only lead to low disappointments, and your P&L can’t be dependent on that final moment when the ball finally drops. However, if you’re armed with some proper planning, an understanding of the Q4 trends, and little research – you can make a (fiscal) new year’s resolution and get that FY19 pipeline into shape!

U.S. Senate: Senators Seek Answers from High-Spending Federal Agencies on ‘Use It or Lose It’ Spending

Nextgov: Get Ready for a Massive Government Spending Spree

The Federal News Network: Government will spend billions in the next 2 months; here are 3 places they should spend it