To REFRESH – a total of $1.23T was officially allocated by the 12 Appropriations Committees for Fiscal Year 2019. 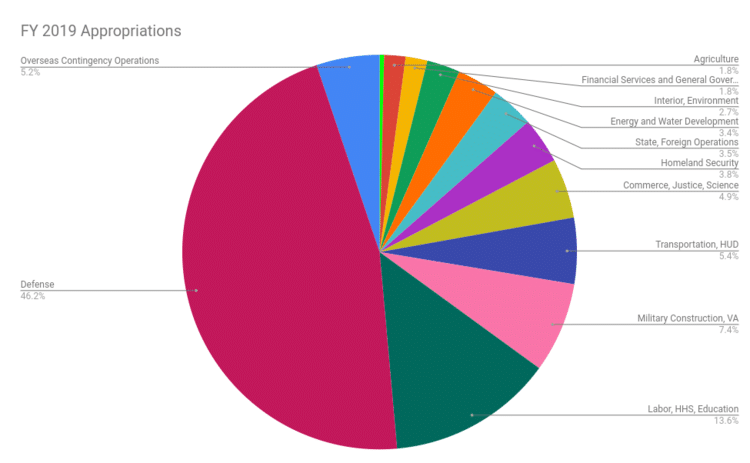 Summary of Spending in Fiscal Year 2019

As we can see from our FY19 Superlatives:

OTA’s may be all the rage these days, but in the Fiscal Year 2019, they only accounted for 2% of total federal obligations. It is important to note that not all OTA spending is put into FPDS as some are similar to FSS obligations.

For reference, we provided the definitions of what a bundled and a consolidated requirement is:

Our point is that FPDS and agency data collection sources do not currently contain sufficient information to quantify the extent to which bundling of contract requirements takes place, and the total obligations set against them, which leads to incomplete information which heavily impacts small and mid-tier businesses. This is further explained by a recent report put out by the Small Business Administration (SBA) where the SBA only received two reports from Federal Agencies regarding their bundling activities in Fiscal Year 2017.

So what does this mean?

Whether it is 19% or 82% – these numbers mean that the Federal Government has been diminishing competition by effectively excluding new comers (non-traditionals) and registered small business (or mid-tier) firms who cannot compete under long-term multiple award contracts (MACs) such as OASIS, CIO-SP3, Alliant and NASA SEWP – or that can’t meet the standards of a broad range scope of work (SOW). This data is further substantiated by our socio-economic competition numbers cited below which shows that Large Businesses in Fiscal Year 2019 took home more than 71% of all total obligated dollars.

So what can factors can attribute to this trend in closed off competition? There are many, but one we can most certainly point to is Category Management and the subjectiveness of Best-In-Class (BIC) Contract designation. According to the Fiscal Year 2019 Presidential Management Agency, Federal Agencies were held accountable for funneling 37% of “BIC-addressable” spending through BIC contracts. This may have seemed like a lofty goal to those that weren’t paying attention, but the Federal Government made substantial progress in Fiscal Year 2018 and now it seems in Fiscal Year 2019.

For the sake of time, The Pulse just pulled the Top 200 beneficiaries of Fiscal Year 2019 federal obligations so far. For the full list, click here.

The Large Business number shouldn’t surprise anyone in Government Contracting, but when looked at through the scope of consolidation and competition, red flags should be waving fervently. Consolidation and the unintended consequences of Category Management for businesses of all sizes impact the critical elements that sustain Government Contracting – competition, innovation, and economic stimulus.

The favorite NAICS of Fiscal Year 2019 was for – surprise – materials. NAICS 33 represents requirements for metals, machinery, computer, electronics, electrical transportation equipment, and furniture, and made up 32% of total federal obligations to date.

With 17% of total obligations, the favorite PSC of Fiscal Year 2019 has been 1 (Products) – shocking.

Federal Government Q4 spending accounted for 24% of all total Fiscal Year 2019 obligations. As we covered in our Q4 Federal Spending Statistics article – we found that FY14 through FY18 averaged obligating around 68% of their GovCon-specific discretionary funding prior to the start of Q4. Leaving at least an average 30% of all fiscal year funds available to GovCons for the Q4 sprint.

In Q4 of Fiscal Year 2019, the Federal Government spent 40% of their total Q4 obligations on professional, scientific and technical services (NAICS 54). As we covered in our Q4 Federal Spending Statistics article – this is inline with typical Q4 spending trends.

In total, the Federal Government spent at least $40B on products versus $79B on services (to include research and development) in Q4 of Fiscal Year 2019. As we covered in our Q4 Federal Spending Statistics article – this is inline with typical Q4 spending trends with PSC R winning out over its colleagues.

A lot of industry consultants and publications are starting to release their trends and predictions for Fiscal Year 2020 concepts – and they do this with limited or unsubstantiated data. The Pulse wants you to be informed, and to take some of the click-bait you see with a grain of salt. When you have the full picture, you are better equipped to see the forest for the trees, and align your strategy to where you fit. Armed with some proper planning, an understanding of the past Fiscal Year trends, and little research – you can begin to get your Fiscal Year 2020 pipeline into shape!

*A note on FPDS.gov: The Federal Procurement Data System—Next Generation (FPDS)—is a central database of U.S. government-wide procurement. FPDS generally reports information on contracts that exceed the micro-purchase threshold, defined in 48 C.F.R. §2.101. 3 The micro-purchase threshold is generally $10,000 (meaning that contract actions above this amount must be reported to FPDS). FPDS does not include data from judicial branch agencies, the legislative branch, certain DOD components, or select executive branch agencies—such as the Central Intelligence Agency and National Security Agency. Unless otherwise indicated, all data in this report are derived from FPDS. Decision makers should be cautious when using obligation data from FPDS to develop policy or otherwise draw conclusions. In some instances, a query for particular data may return differing results, depending on the parameters and timing.