Warning/Disclaimer: The Pulse GovCon MythBusters are professionals. Research was conducted with the assistance with of an OG Pulse Contributor and FPDS Maven (thank you!). Do not try this at home. This is not your typical OTA article.

“Other Transactions” or “OTA” (A for “Authority”)  – are the newest buzzwords to hit the GovCon streets. So naturally, everyone is confused and nodding their heads in rhythmic agreement. Typical.  From reports saying that “OTAs” are a new procurement method, and others saying this is the future of just DoD R&D procurement, we are here to debunk and clarify. You can call us the GovCon MythBusters. 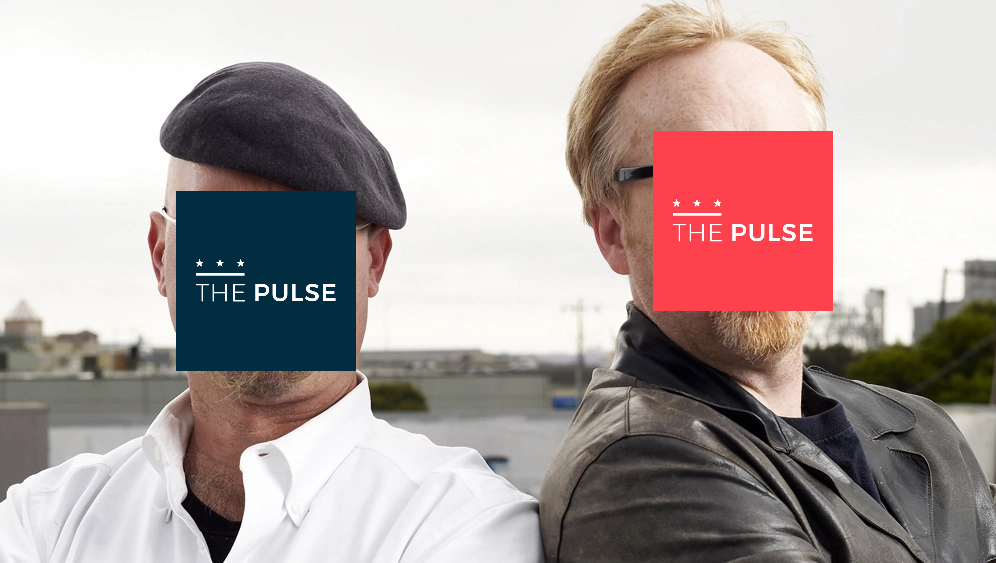 (We’re totally fighting over who gets to wear the beret)

What is an OTA? Before we start busting those myths left and right, The Pulse would like to make sure we’re all on the same page:

What is an “Other Transaction”?

An “Other Transaction Authority” (OTA) is essentially how it sounds….it’s  an(other) way to work with the Federal Government (FedGov). Think of it as the “other white meat” vs. conventional FAR-regulated contracts, grants, or cooperative agreements usually intended to provide goods and services. OTAs are legally binding instruments that are used as a workaround to doing business with FedGov and to engage Non-Traditional Contractor Participation (NTCP) for a broad range of research and prototyping activities. OTs can be defined by what they are not: they are not subject to the federal law and regulations that apply to Government procurement contracts (e.g., FAR/DFARS).

What is an OT Consortia?

The consortia procurement route is typical when the FedGov has an OTA requirement. An “OT Consortia” is when the FedGov works with an organized group that agrees to participate under a common rule set– like a well-organized club– versus contracting with a single GovCon. The consortia has one “leader” who employs a management organization to address administrative needs and manages the flow of information from the FedGov to the consortia. Once the consortia is established, FedGov customers may issue calls for white papers to the entire group. The FedGov may then select a small number of companies to submit a more formal proposal. Ultimately, the FedGov selects one or more awardees and delivers funding to the selected consortium member(s) – typically through their “leader”.

Who uses these methods and why?

The original intent of an OTA was for commercial businesses to work with the Government on more appealing terms. One of the commercial sector’s biggest pushback to working with the FedGov is the stodgy bureaucracy, the never-ending red tape – oh, and that pesky IP rule. OTAs, however, are unencumbered by Federal Procurement Laws and Regulations. Think about bidding for work without worrying about the FAR, DFAR, having the right cost-based pricing systems, and being DCAA audited…to name a few.

So where are we now in the current “OTA landscape”?

While OTAs have historically tried to stay off the radar, the FY16 NDAA put them back on the map. Pair that with the overarching goal to simplify and revamp the process – and funding numbers in the high millions – and you’ve got yourself a spotlight.  While you were sleeping, OTA spending in the FedGov has increased by 1087% in total since FY09.

False. OTAs were developed by Congress in 1958, and were directly correlated with Sputnik and the development of NASA.  For more information on the history of OTs, click here.

Myth 2: OTAs are only used by the Department of Defense.

False. OTAs can help the FedGov work it harder, make it better, do it faster, and make them stronger. After NASA in 1958, seven other FedGov agencies have been given OT authority: DoD, FAA, DOT, DHS, TSA, HHS, and DOE. While the Army has 52% of the OTA spending, FedGov agencies like TSA (25%) and DARPA (12%) remain pretty active. 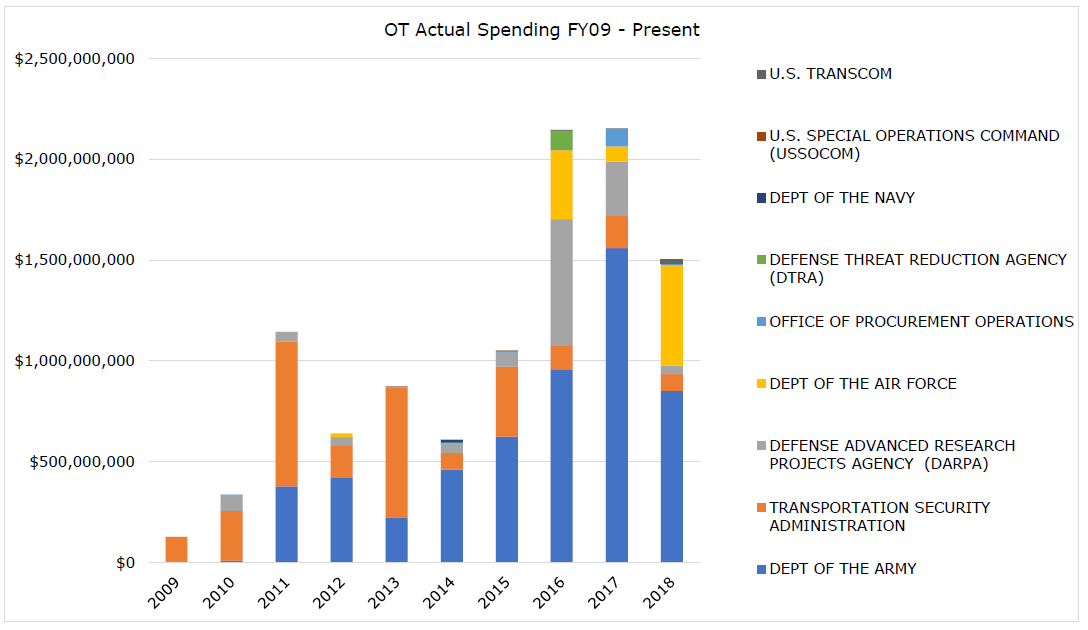 Myth 3: OTAs are the only other type of “procurement” method.

False. Oy, do we have news for you. Just when you finally felt situated in your procurement happy-place, we’re here to tell you that not only are there other ways of doing business with the FedGov through OTAs, but these OTs have various subtypes:

Myth 4: OTA awards are only for RDT&E.

False. While the principal purpose of an OTA is for Research, Development, Test, and Evaluation (RDT&E) activities, Congress has provided an ambiguously defined authority to link a FAR-based procurement contract to an OTA for Prototypes when the OTA is competitively awarded. Out of the $10.578B quoted earlier, FedGov has spent $6.422B on OTA agreements under R&D Product and Service Codes (PSC). That means that the remaining $4.162B has been spent elsewhere. 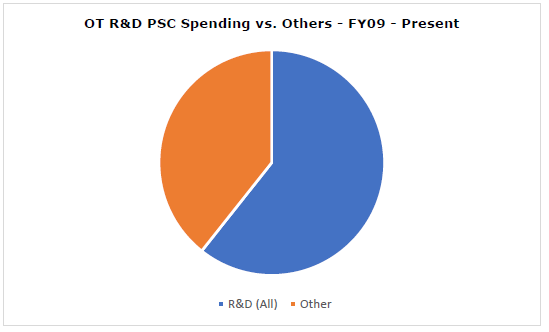 Myth 5: OTAs are only awarded to Non-Traditional Contractors (NTC) through external consortiums created outside of FedGov.

False. Any established GovCon, commercial, or academic institution is eligible to receive an OTA award. OTAs may be awarded under the following circumstances:

Myth 6: The main driver for OTAs is to increase Non-Traditional Contractor (NTC) participation in FedGov projects.

False. Our OG Pulse Contributor and FPDS Maven finds this to be an interesting metric because the whole point of OTAs is to open up to NTCs, but as % of OTA spend, only the Army is currently meeting the mission. TSA, DARPA, and Air Force all have a significant portion of their OTAs coming in as cost-sharing (see Myth 5). 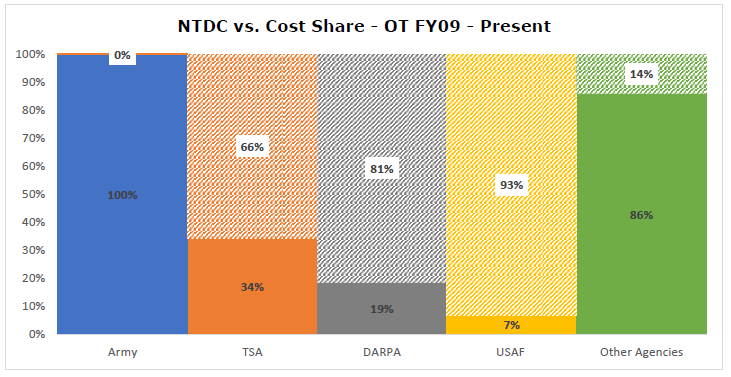 Myth 7: OTAs are not protestable.

False. Late last month, GAO overturned a $950B DoD contract award to REAN Cloud LLC (REAN) – and it is causing some waves. In short, DIUx used the “production other transaction agreement” route (see Myth 5) to make the award and Oracle called BS. Oracle filed a protest with GAO, and the watchdog agreed with the company that the Pentagon’s use of OT authority was improper. GAO’s decision was a blow to many officials desperate to reform the government’s antiquated procurement practices.

Myth 8: OTAs are not typically competed.

True. Since FY09, an overwhelming amount of OTA awards have not been competed. One could make a statement that $7.2B worth of FedGov work should at least see some open competition, yes?

Myth 9: OTAs are limited in funding.

False. Each FedGov authority is able to execute OTAs up to $250M, and there are no limits on how many OTAs may be executed by the services or the cumulative value of such awards. We repeat: there is no limit to the number or dollar value of OTs that the FedGov authority may execute in aggregate.

We in this GovCon industry are never truly happy, so we generally serve our dishes with a side of skepticism. Here are a few unfortunate trends The Pulse and our Contributor see:

We all got 99 problems, but a lack of profitable contracts ain’t one. Despite the inherent problems and all-around confusion, using OTAs is a viable way of getting a piece of the Federal pie.

What Exactly is the Federal Risk and Authorization Management Program?

Show Me the [GovCon] Money!

Congressional Research Service: Department of Defense Use of Other Transaction Authority: Background, Analysis, and Issues for Congress