*Special shout out to our OG Pulse Contributor (you know who you are)! Thanks for nerding out with us.*

Artificial Intelligence (AI) has been the hot topic as we enter into the year 2018, and for you Spielberg fans, we’re not referring to the 2001 science fiction/tech-noir film where a robotic child was programmed to feel love.

The noise around AI has been a buzz that is steadily turning into a fanfare- but do we in GovCon really know what it entails? It is the subject of numerous technical conferences, repetitive Government initiatives and legislation, and our new National Defense Strategy. Google’s CEO even stated that AI is a bigger deal than fire or electricity. However, such as with any new buzzword, there is a discrepancy between seeing it listed in the Scope of Work vs. what it actually means.

So what is the true definition of Artificial Intelligence? Merriam-Webster defines it as “the capability of a machine to imitate the intelligent human behavior”. Too broad. By that rationale, your Chatty Cathy from the 1960s would count. We dug a little further, and according to The Guardian AI has various definitions, but in general, it is defined as a program that uses data to build a model of some aspect of the world. This model is then used to make informed decisions and predictions about future events. 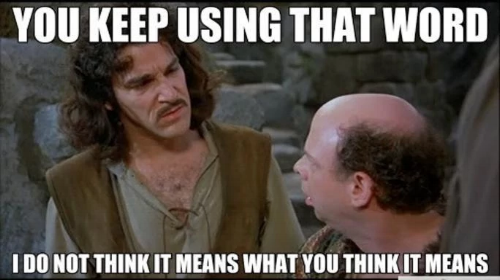 According to Google Trends, general interest in AI has consistently increased around the world over the past five years. AI technology today is widely used to provide speech and face recognition, transform your google search engine, and drive personal recommendations on music, film and shopping sites. In the [not so distant] future, it could deliver parallel information processing, driverless cars, smart personal assistants, and intelligent energy grids, just to name a few life-changing innovations.

And therein lies the confusion and the overuse of the term. Because truthfully the application of AI is in transition. Unfortunately, that means that your Alexa is as much AI as your Furby was back in 1998. Rather, those in the know refer to Machine Intelligence, or MACINT, thus adding another member to the -INT family.

This assertion might rub people the wrong way, but when it comes to the true definition of AI The Pulse agrees with BoldIQ CEO, Roei Ganzarski, who stated that “true artificial intelligence does not exist and will not exist for at least another decade.” Instead, Mr. Ganzarski suggests, that while many companies claim to do ‘AI’ and provide ‘AI-driven’ solutions, in reality, they are providing an augmented solution by leveraging machine learning techniques at best, developing what Ganzarski refers to as augmented intelligence.

Mr. Ganzarski goes on to reference how IBM (who  created Watson™, arguably the first famous “AI” technology with a cute face and a commercial) agrees with this definition, and believes that today’s technologies are more data-driven than ever, but aren’t yet advanced enough to think for themselves.

If we are going by this interpretation, then IBM’s Watson™ doesn’t count. With Watson ™ you have to train the answers ahead of time. Further, you cannot ‘audit’ the black box that is the process running behind Watson™. This means you cannot trace or see the Watson™ “thought process,” only the output. In simplistic terms, Watson™ does not show its work–it merely provides predictions without justification. Not showing your work in elementary school math class was frowned upon, so we think our teachers would give this an “F” in the standard of intelligence.

There are instances that would seemingly disprove this assertion, such as in the case of DeepMind’s AlphaZero and its hotly contested chess game. Within four hours, AlphaZero, DeepMind’s AI System had taught itself to beat a champion chess program. An impressive feat, but one that was achieved by carefully manipulating the experiment, Jose Camacho Collados, an AI/NLP researcher and a chess International Master, argued in his Medium analysis this past December.

Regardless of strict definitions, advancements in data-driven AI (or MACINT) has been publically advancing at an increased rate with major breakthroughs in the past two years, and even recently helped NASA discover a new planet. It is safe to say that this technology shows no signs of slowing down, and contrary to popular opinion, it seems that the Federal Government has been quietly pursuing these requirements for quite some time. Since 1985 to be precise. So what acronym came first in Government spending? AI.

As a prime example of a rose by any other name, there is even variation in spending across the top three terms, with MACINT well in the lead. Just by doing a quick FPDS analysis, the Government has spent more or less $186,411,944.78 between AI, MACINT, and Machine Learning requirements since 1985, and almost 50% of that has been spent on MACINT requirements. 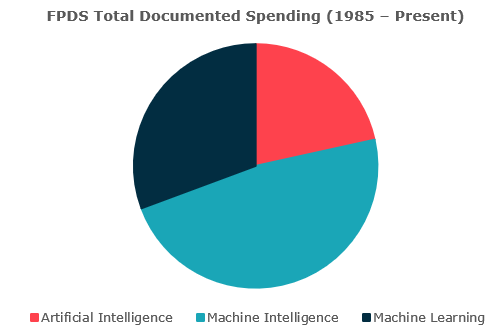 In our introduction, we briefly discussed how AI (or MACINT) has found itself to be the focal point of numerous Federal discussions, conferences, and legislation. Well wouldn’t you know it, it has also been at the center of the GovCon industry’s most influential circles:

AI was a definite Congressional focus under the Obama Administration, but under the Trump Administration there is a concern about the President’s lack of interest. Regardless, Trade Organizations, Congress and Federal Agencies have been laying the groundwork for AI, and the “building blocks are already in place at many agencies. The two capabilities at the heart of what some call “narrow” AI – a capability with a narrowly defined objective –  are machine learning and autonomy. Use of these technologies is already growing at the Department of Defense, for instance.” In addition, select civilian agencies, like DHS, DOE, NASA, and others, use machine learning and they are exploring autonomy for things like self-driving cars and unmanned vehicles. Recent examples within agencies include:

National Defense Strategy: Surprise! Our National Defense Strategy was released just a few days ago and flew completely under the radar. DefenseNews provides a great summary in an article written by Aaron Mehta. Among the top priorities? Adapting at the speed of our data by  investing “broadly” in technologies such as AI. That priority is ahead of terrorism, crazy times eh?

FY18 National Defense Authorization Act (NDAA): One of the largest shakeups in the FY18 NDAA was the consolidation, split, and creation of a few acquisition offices in hopes of consolidating data across silos. The House bill contained a provision (Section 831) that would require the Secretary of Defense to establish that all data within Defense business systems is considered owned by the Department and is readily available to the Office of the Secretary of Defense, the Joint Staff, and the military departments.

AI Jobs Act: Don’t worry guys, Congress may not be capable of giving us one year of consistent funding – but they can take steps to pass legislation which protects “us” from the robots taking our jobs in 2030. Read how Congress is taking important steps to prepare U.S. workers for the “AI Economy” [insert eyeroll here]. 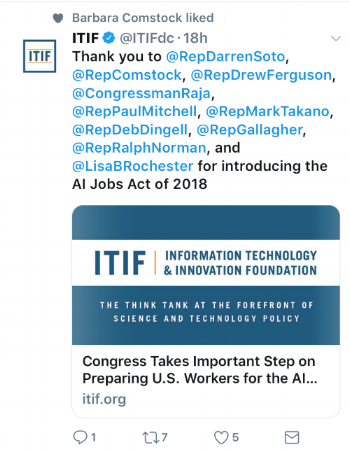 Creation of DIUx: As with any new, excitingly futuristic tech, there are agencies working to be at the forefront of the movement. DIUx is a Defense organization focused on accelerating commercial technologies to the U.S. military. Launched in 2015, the organization has been called “The Pentagon’s Innovation Experiment” and is backed by some pretty heavy hitters. As of September 30, 2017, Defense Innovation Unit Experimental (DIUx) claims* that it has awarded roughly $184 million for 59 pilot contracts and two follow-on production contracts in the areas of autonomy, artificial intelligence, human systems, information technology, and space. Just in Q4 of FY17 alone, DIUx officially funded eleven separate projects to the tune of $35.9M.

As an example, Project QuANTUM (Quantitative Augmentation of Enterprise-Level Decision Processes), ran on behalf of the USAF, is one of the most innovative operationalization of A.I. so far. USAF is using Strategic Mission Elements, Rhombus Power, and SparkCognition machine learning tools to aggregate, analyze and visualize enterprise data to quantitatively augment strategic decision-making. Period of performance for all three GovCons began in July 2017 and has received $1.1M in funding so far. It appears the above represents the first phase, aligning the data through the Extract, Transform, Load (ETL) process, before moving into the next phase of analysis. When this is completed it will represent a significant step for the Secretary of Defense’s priorities noted above from the FY18 NDAA.

*After doing some FPDS digging, we found that one of the largest funded DIUx projects to date has been a Raytheon Other Transaction Agreement (OTA) to the tune of $342.83M in support of Kinetic Drone Defeat which trounces the “rough” $184M claimed.

The list above shows why we are obsessing over literal definitions here. Between AI, Machine Learning, and MACINT, you have to wonder about consistency when working with the Federal Government, especially when there are billions of dollars at play. And as hard as it may be, instead of following the money *gasp* what we should really be caring about is if the Federal Government is asking the right questions of industry, and if they are defining their requirements correctly. Because while AI, MACINT, and Machine Learning seem extremely niche and limited to things that are shiny, its uses go beyond Defense and robots. The immediate future of AI will not be fleets of driverless cars, but near-term future benefits are proving to be making a difference when definitions and capabilities are applied correctly.

As you can see, we are at an interesting technological crossroads. Gone are the days of tinkering R&D and performing outlandish ‘experiments’ – rather, MACINT has matured to a level of actualization. The math is solid, the platforms are mature, and the only thing we are lacking is a willingness to take on the responsibility of being able to make decisions smarter and faster. And with the recent Government shutdown does it really seem like our leaders are ready for all that? 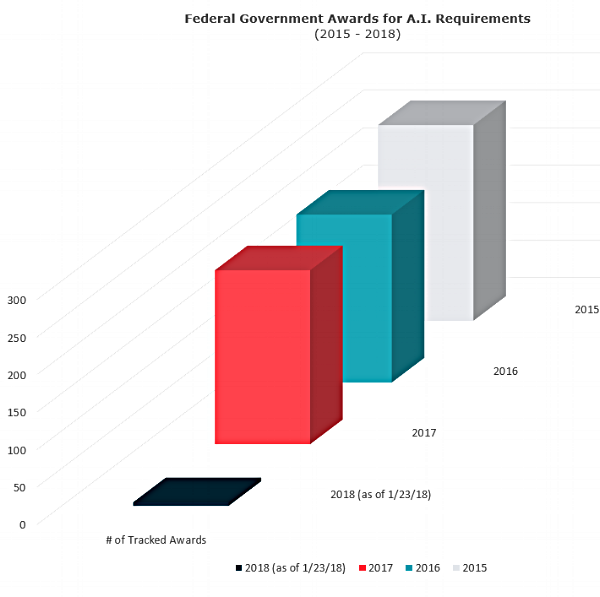 We jest, but we can’t help feeling like there is a luddite-sized pothole in the middle of this crossroad. Agencies are struggling to find the funding, expertise, and personnel required to modernize their antiqued technology infrastructures as they lag pathetically behind the commercial world and the globe.

Well ready or not, here they come with a blank check. Federal awards and spending in AI and similar requirements haven’t slowed down and is projected to increase in 2018, especially with the massive increase in use of OTA’s – but that’s a topic for another day. Alexander Rossino from Deltek reported in April 2017 that just Defense is projected to spend an average of ~$780M per year from FY18 to FY20.

AI has the potential to be more advanced than the “deep” mechanisms at work behind partial text, speech, and dialogue recognition ability sprinkled in with some machine learning. There has always a been a balance between advancements in technology and the excessive fear mongering behind “technopanic”. The same can be said about AI, which has been the basis of science fiction horror stories in movies, television, comics, and books. As with anything there are always pros and cons, but the biggest con here  is the assumption that new tech will limit job opportunities and render real workers more or less obsolete. We believe that AI, MACINT, and Machine Learning is here to augment and enhance the GovCon world, if we can get it right.

In a data-driven industry like GovCon there is insight buried in the minutia, and those who can unlock it are going to be able to rapidly approach the market in a smarter way. Advancements in this type of machine learning will help to reinforce those disseminating data today, not replace them. Regardless, it’s obvious that AI, Machine Learning, robotics, etc. will have an impact on our world and daily lives. Who knows, maybe the AI that detects deception will even be able to tell you who your Pulse gals are. (01011000 01001111 01011000 01001111)