Show Me the [GovCon] Money!

A Budget Breakdown from FY 2018

The Fiscal Year 2018 budget deal enacted a massive increase in discretionary spending with $564.745B being spent by the entire Federal Government. An increase of nearly $78B since 2013. 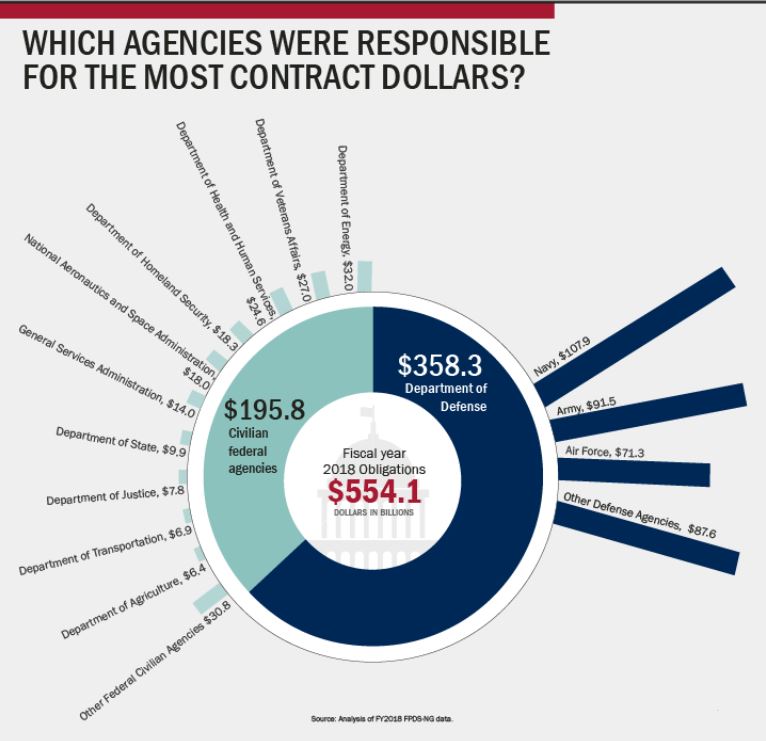 According to the Committee for Responsible Fiscal Budget (CRFB), the 2018 Budget Deal grew spending by 16% from 2017 to 2019, blew through the bipartisan caps set in 2011, and added $420B to the debt – mostly over two (2) years. Today’s spending levels are high by historical standards. In inflation-adjusted dollars, base discretionary spending today is higher than any other time in history outside of 2010. Even as a share of Gross Domestic Product (GDP), discretionary spending is in line with historical averages.

Between 2017 and today, appropriations increased 16%, from $1.070T to $1.244T. Defense spending grew 17%, while non-defense grew 15%. Some areas have enjoyed even faster growth – for example, Transportation (DOT) and Housing and Urban Development (HUD) funding grew 23%.

In Fiscal Year 2018 only 53% of Defense contracts were competitively awarded in contrast to the 80% of civilian contracts, according to GAO. Furthermore, GAO also stated that the amount of competitive procurement’s government-wide dropped by 3% to 63.4% between 2014 and 2018. 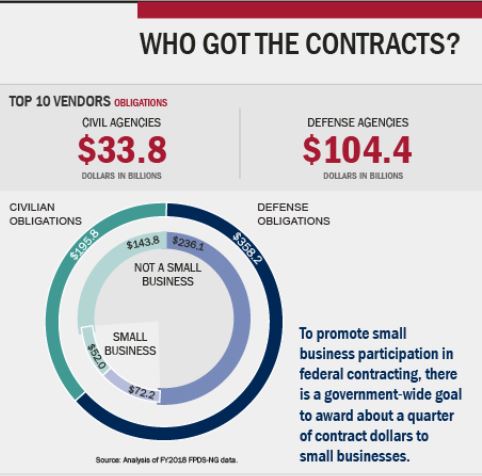 Presently, the Civilian market appears to be a better field of play for small contractors than the much more top end concentrated Defense market. But it is important to note that the key word here is “presently” and concentration of the award distribution for both Defense and Civilian markets will be an important trend to follow in the years ahead.

Federal Agency spending on products and services in Fiscal Year 2018 spiked to the highest amount in seven years. In Fiscal Year 2018 the entire Federal Government spent $224.750B on Products and $340.040B on Services (including R&D). This means that the Federal Government spent over 40% of their discretionary dollars on products i.e. licenses, subscriptions, weapons, COTS, GOTS, pens, paper, etc. 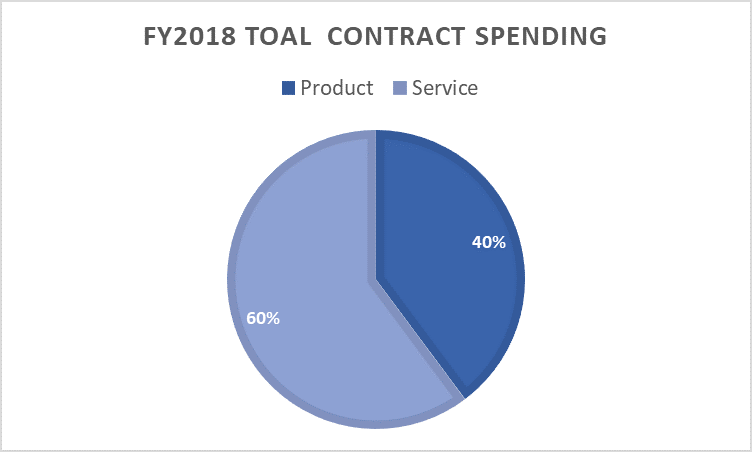 In Fiscal Year 2017 – according to a CRS Report on Defense Acquisitions – the Department of Defense obligated 41% of total DoD contract obligations to Services, 51% to Products, and 8% to Research & Development (R&D).

If we compare this to the current FPDS and GAO infographic data – we can see that everything is still tracking in the same trend. In Fiscal Year 2018 the Department of Defense obligated 48% of their dollars to Services (including R&D) and 52% to Products. Right on target. 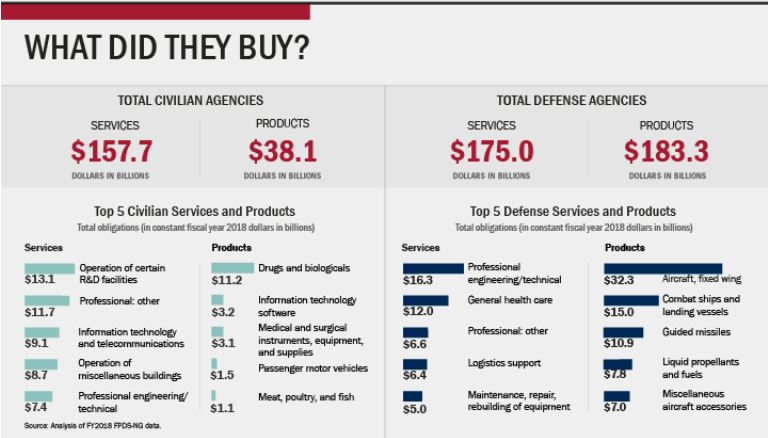 While spending on human services has grown to represent a greater share of GDP over time, the Defense share continues to become smaller as Information Technology (IT) requirements reign supreme. According to Bloomberg Government, the Defense Department’s IT contracts – which include both Services and Products – spending grew by more than 12% in Fiscal Year 2018, while total IT contract spending by Civilian Agencies rose to a 6.6% increase. 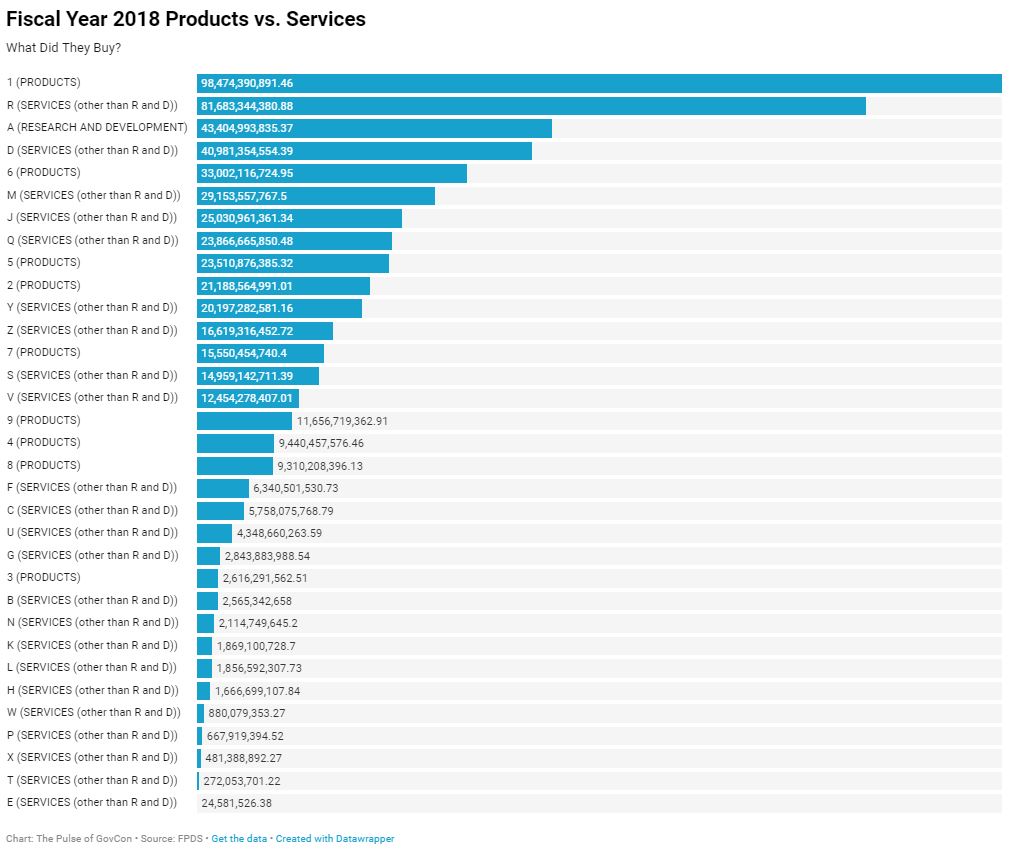 The rumors are true – there was more discretionary dollars spent in Fiscal Year 2018 than in the last seven years. Industry pundits will use this rhetoric to convince you, the small to mid-tier Government Contractor, that this money is yours for the taking. This is why a breakout analysis of the who, what, and where is so important.

Fiscal Year 2018 might have seen a lot of money spent, but keep in mind:

Context is important, people – so we implore you to always read the fine print.