Mergers and Acquisitions (M&A) in GovCon is nothing new, but the playing field is starting to look less like a game of golf, and more like a round of Mixed Martial Arts (MMA). Somewhere along the way, this game of buying and building went from civilized quiet applause, to a raw and brutal contact sport.

In an industry where, “do we go for scale, diversification, or capability” has become a classic Catch-22, GovCons are working hard to determine the best way to build their empires. And they are empires, where the term “big” just keeps getting bigger.

Back in 2012, the post-9/11 world saw a boom of start-up GovCon businesses with plenty of work to share. So much so, that even today a mutually agreed upon and accurate number of how many GovCon businesses are out there does not exist.

Cut to now, where the GovCon universe seems to be reshaping. As Federal Government programs continue to evolve, consolidate, and be categorized — will GovCons need to be in the $B’s to be relevant, let alone be competitive?

GovCon M&A has come a long way since it rebounded from a lull in 2013. According to Bloomberg Government, there has been more than 1,700 GovCon M&A deals since 2015. GovCon organizations, and now private equity firms, use M&A as a tool to:

But what does that really mean for GovCon? We at The Pulse believe it means that the way we strategize the procurement of contracts is changing, and not in a way that empowers the little guys.

A factor that drives M&A is the value of various Federal Government vehicles. Over the past few years, Federal agencies have begun to consolidate work previously performed under single-award contracts and/or smaller, internal multiple award contracts (MACs) as opposed to gigantic vehicles and schedules. This approach essentially opened up the GovCon competitive arena as it allowed for contracting offices to procure redundant services or products from multiple vendors. Good for GovCon, not so great for the taxpayers.

Today, contracting offices are increasingly facing pressure to consolidate contracts into existing Government-wide MACs, as officials in the Executive and Legislative branches push Category Management and the use of Best-In-Class (BIC) contracts. This means that contract portfolios are becoming more important.

As the Government continues to award longer duration contracts with an increased number of awardees, vehicle placement remains important as ever, and a motivator for those on the sidelines to aggressively pursue lines of business with “crown jewel vehicles”.

In response, some GovCons have explored the transfer or selling of a contract to a third party in order to generate revenue. 41 U.S.C. § 6305, better known as the “Contract Act”, essentially prohibits such activity from occurring…unless it is in the Government’s best interest. As though the risks inherent in a M&A were not enough to turn any BD professional prematurely gray, when one or both of the entities in play are GovCons, the risks become even greater. One of the primary sources of these additional risks is the Federal Government’s novation rules.

The contract novation process is guided by FAR Subpart 42.12 (specifically FAR 42.1204) and can only be done under certain circumstances (i.e., the sale of all the contractor’s assets) per US law section https://www.law.cornell.edu/uscode/text/41/6305 .Therefore, the method of sale such as an asset, must be for stock, the company or a division, i.e. selling all capabilities that got you to the award. As such, the cost of a contract might be the invested costs which include past performances, key personnel, certifications, and the work in managing and capturing the contract.

In short, and not in any legal terms whatsoever, this basically means you could work your BD & proposal shop to death to get on a game-changing contract with 80+ companies just like you (size, capability, etc.) — and then[insert giant multi-million dollar contractor name in here] could essentially end being your competitor because they paid the person sitting next to you for their seat. 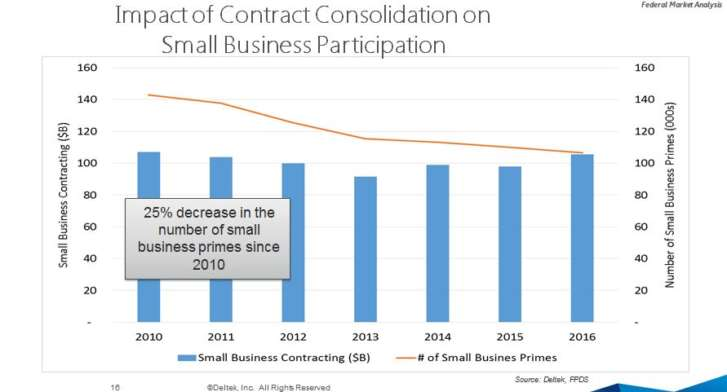 According to a Deltek study conducted in 2017, and presented by Federal News Radio, the number of small business prime contractors are down by 25% since 2010. In short, this means the pool of competition and the GovCon marketplace is consolidating and inflating — not growing.

As Industry correctly points out, the reduced number of small businesses eligible for Prime contracts is one of the consequences of the the breakneck M&A speed that GovCon is moving. This has resulted in larger and consolidated competitions evoking several reactions that can be observed on the GovCon battle ground today:

Bidding on BICs: In an effort to reduce the number of MACs, many Federal agencies have begun implementing the policies and procedures outlined in various memos and documents that dictate the Category Management initiative, which nudges (more like a hard push) the use of BICs. A majority of BICs are mixed Government-wide MACs with limited capacity which means your competition class is predetermined before weigh-in. Since these vehicles have little to no on-ramp opportunity, you are stuck in the nosebleeds watching the fight if you aren’t a Prime for 10 to 15 years.

A Team of Smalls to Conquer Broad Scopes: Federal agencies have started relying on vehicles with broad scopes and a large number of seats to allow for flexible procurement. Broad vehicles require either large teams or broad capabilities to address the requirements, hence the creation of a “Team of Smalls.” This type of team composition is reminiscent of Bugs Bunny’s Tune Squad going up against the Monstars in Space Jam; aka 20 smalls vs. 1 Large Prime. This approach is limiting and skews the number of companies involved, as only the Prime is listed, but in the background you know it takes a village.

Leveraging Socioeconomic Only Vehicles: The use of socioeconomic-only contracts exclude all other competitors (including other smalls), which can impact the number of bidders.

These claims are nothing new…every GovCon news source closely follows and reports on M&A within our industry. But The Pulse got curious about what this means for the featherweight champs going after these Government-wide contracts that have spiked in popularity over the last few years due to consolidation and BIC designations.

So we took our fights out of the ring and into the streets! The Pulse dove into five popular designated BICs:

And what we found is causing us to raise our eyebrows at the rules, regulations, and referees who are supposed to be protecting all who enter the cage. Below is a summary table of what we examined.

The table below lists the BIC Contract Name, the description from the BIC sheet, the claimed % of Small Business utilization listed on the BIC sheet, overall contract number, the ceiling value and actual contract value (because yes, they are different), end of ordering period date, and the number of Prime vendors.

The interesting elements are the last two highlighted columns:

Our supporting data, including number of employees, annual revenue for each Prime organizations, can be found here. Our research also includes the:

We’ll allow you to look at our research (all data available for free through Acquisition Gateway and FPDS for those who know how to look) and make your own inferences on what this all means — but here is our short summary: 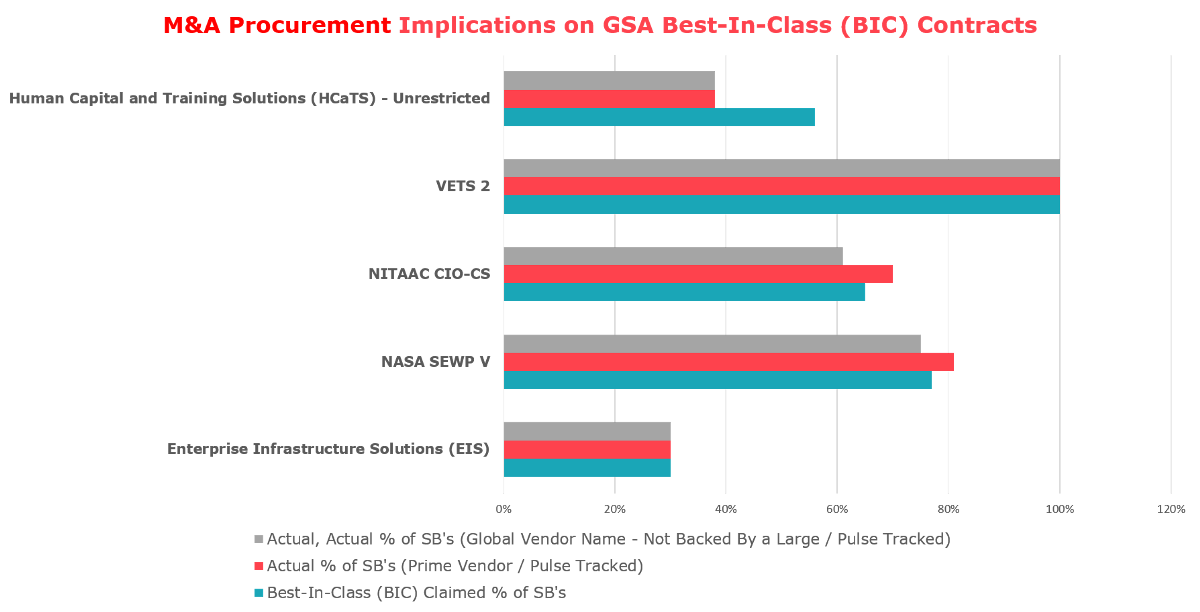 Moral of the Story: Even those contracts that have SB obligations and tracks aren’t entirely safe from large business competition. BIC contracts are gaining staying power as they provide an easier path for contracting offices, and have longer periods of performance. Because of this, and through the use of strategic M&A, there are people outside of your “weight class” ready to pound you into the ground. Get your protective gear and get ready to rumble.

We’ll see you in the Octogon, GovCon.