Despite its alluring mission of promoting economic growth, the Department of Commerce could be considered the wallflower of GovCon customers; it’s technically at the dance, but not shaking it wildly out on the floor. Officially founded in 1913, the Department of Commerce was made legitimate when the labor and business movements forced President Theodore Roosevelt to separate it from the Department of Labor. Since then, Commerce has done what all good wallflowers do — it watches, listens, and seeks to understand — all while avoiding threats of new social interactions and change.

We could (and probably should) spend a whole day talking about each one of those critical agencies, but with the year 2020 rapidly approaching, our focus today is on the Census Bureau and its lucrative (yet borderline hidden) GovCon opportunities.

Headquartered in Suitland, Maryland, the Census Bureau houses over 4,000 employees. Up until 2013, Census operated in regional offices located in 12 major U.S. cities, but is now only in six due to increasing costs of data collection and decreasing federal funds.

Census can’t seem to catch a break. Upon taking office in 2017, the Trump administration cut the budget request for the Census Bureau by another 10% and the Director of the Census Bureau, Mr. John Thompson, resigned. Since June, the Census Bureau has been operating without a Director, but does have a nominee waiting in the wings.

Regardless, the Census Bureau continues it’s attempt to carry out their primary obligation— collecting statistics about the nation, its people, and our economy. This means being responsible for continually conducting dozens of surveys such as the American Community Survey, the U.S. Economic Census, the Current Population Survey, and its crown jewel, the decennial census, coming to you in 2020.

Every ten years the nation turns the spotlight to the Census Bureau as it awkwardly attempts to fund and perform its decennial census, with efforts akin to raising money for a high school prom. Established in 1790, the first census, requested by President Washington, was performed to get a U.S. headcount by household, resulting in the U.S. FedGov’s first big data collection activity. Today, the U.S. census is much more than a head count. It is supposed to serve as a snapshot of America, and determines issues such as how congressional seats are appointed and how to distribute $675B in federal funds.

The lifecycle cost of FedGov performing the census has dramatically increased over the years. The 2000 census cost $4.5B → 2010 census landed at $14.7B → and the 2020 census is projected a whopping $17.8B. Although this cash is not all contractor accessible, the increased cost associated with this event has caused Census to turn to GovCon for some much needed help.

In fact, since 2001, Census has provided at least $2.1B in federal funds to GovCons in support of 2010 and 2020 census requirements thus far; with USASpending.gov putting total obligations at $2.4B. 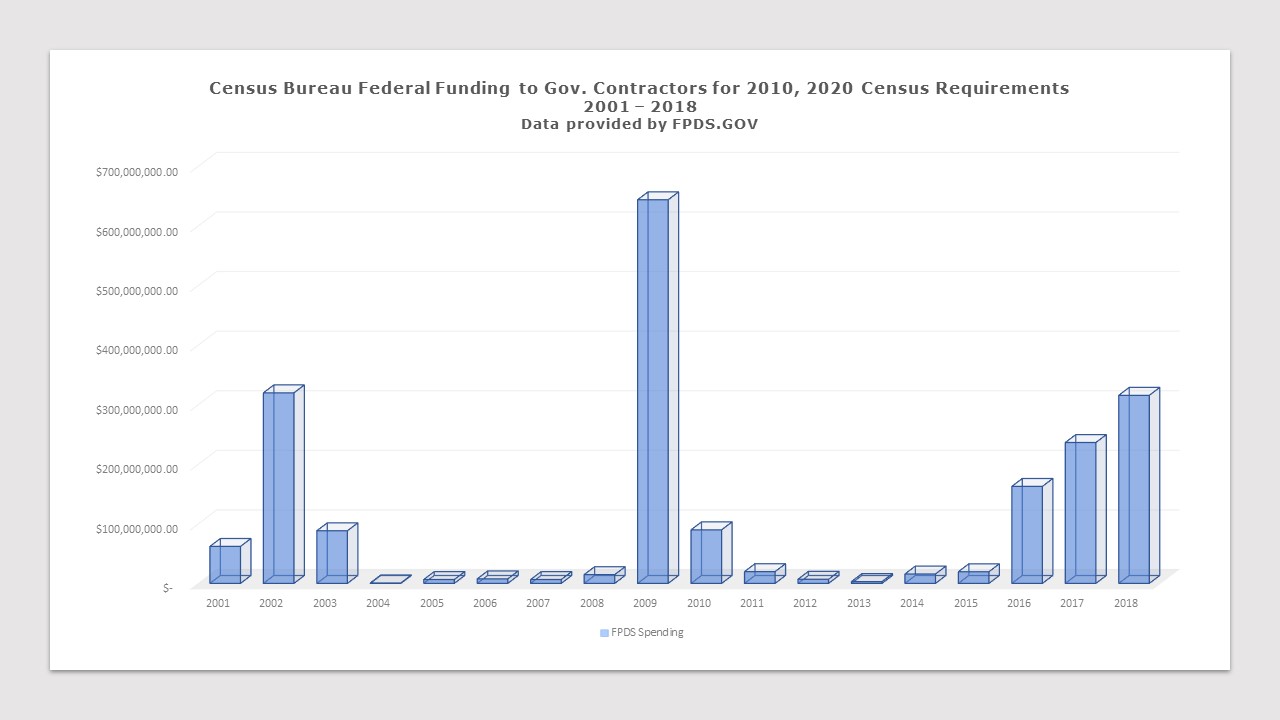 A note on our findings: The decennial census occurs once every ten years, and with the rapid rate of change in technology as well as that pesky inflation, the data can be skewed. For example, “prices in 2018 are 46.34% higher than prices in 2000”. Not only that, but costs associated with the development of technology have changed, since technology is getting more advanced, and in some cases, cheaper to produce. 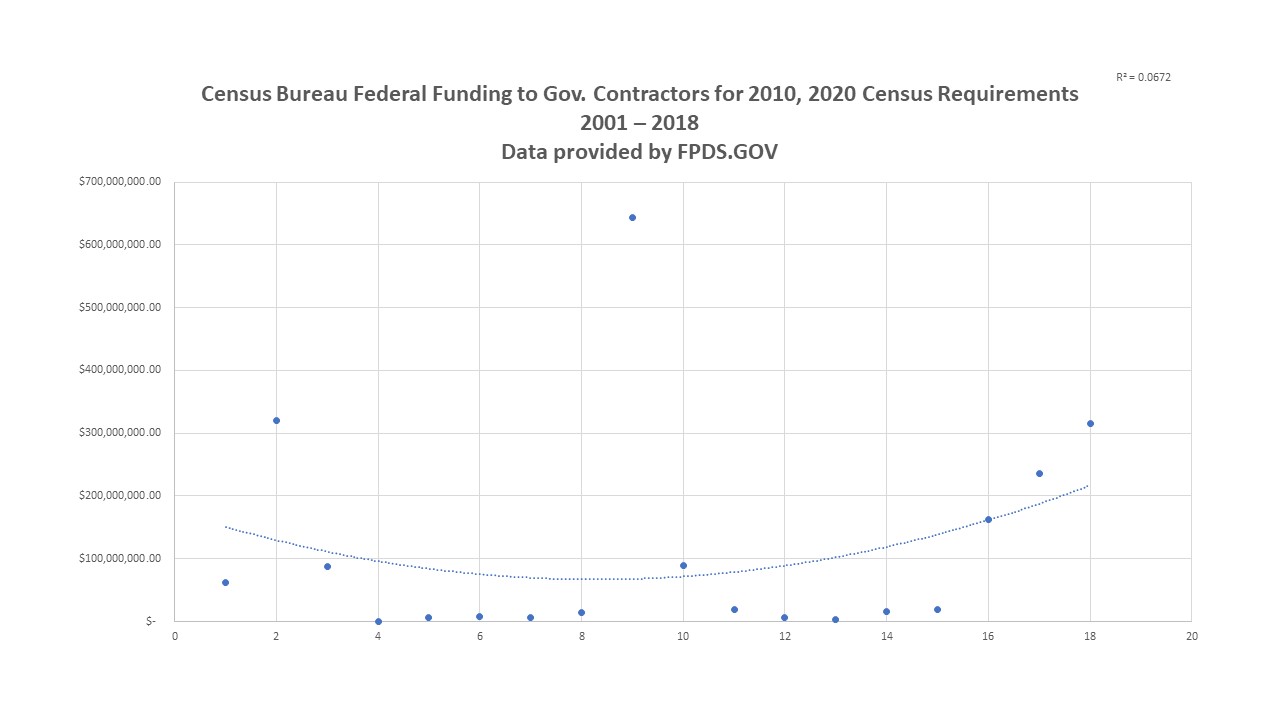 We can also see, ever so slightly, a small trend of decennial census spending increasing one or two fiscal years prior to the actual year of the census (aka 2020). There isn’t enough data in FPDS to fully confirm this theory, but if our analysis is correct, FY19 could prove to be a big year in 2020 census requirement funding.

Another interesting data point to note is the competition type of these federal funds in support of 2010 and 2020 census requirements. Unrestricted competition takes a huge lead by 46% followed by competition under Special Acquisition Programs (SAP) at 24%. 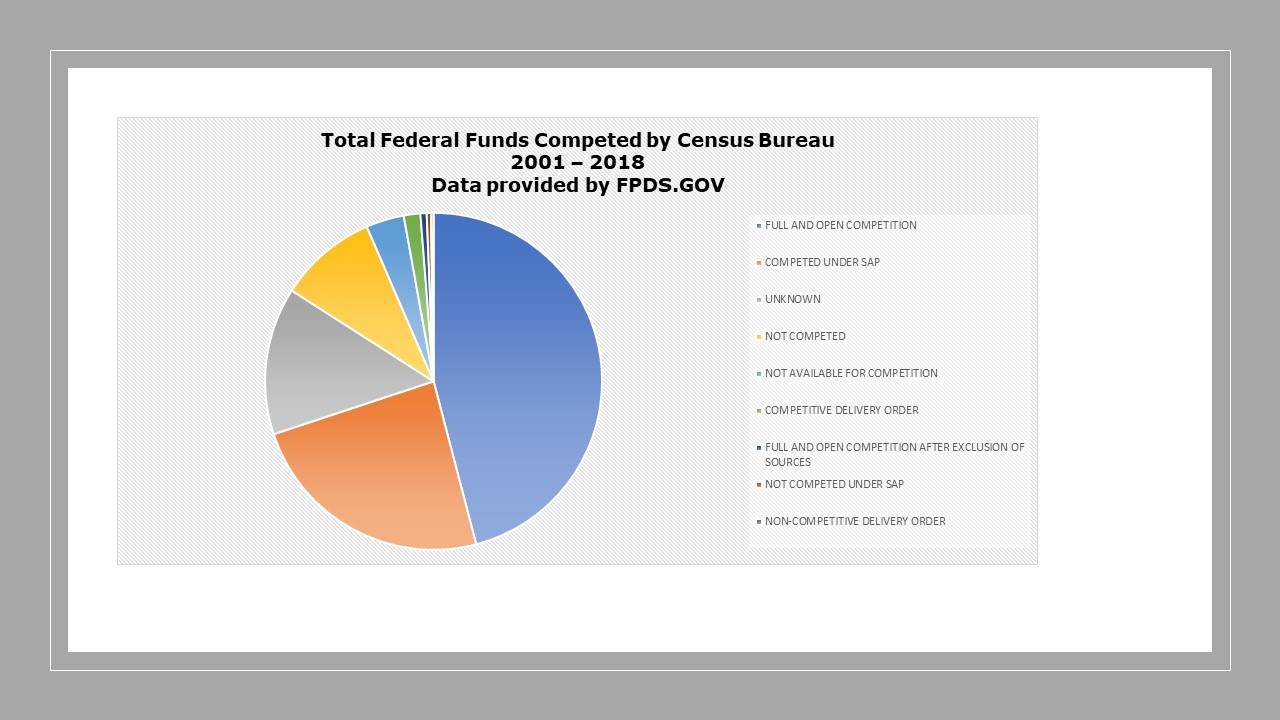 Earlier this year, the FY18 Omnibus spending bill allocated $2.8B+ for Census, with over $2.5B going to “periodic programs”, including the decennial census, and other surveys conducted by the bureau and support programs. Furthermore, the Omnibus allocated $1.28B for information technology related to 2020 census delivery, including the Census Enterprise Data Collection and Processing (CEDCaP) program.

So how much of this $2.8B has been spent already this fiscal year? According to FPDS, only $323M – leaving a lot of money on the table with only a few more weeks in FY18 to go.

What’s the hold up? Because of “resource uncertainty” we detailed above, the Census Bureau has missed some key IT deadlines pushing GAO to designate the 2020 Census as a government program at “high risk” of failure. This is not good because not only is the 2020 census expected to be the most complex, technology-focused, security-riddled decennial count in history, but they could be potentially leaving $2.3B on the table in FY18.

But that can be fixed in FY19, right? Maybe. Right now all signs point to the Commerce-Justice-Science FY19 appropriations bills being funded under continuing resolutions (CRs) until after the midterm elections or possibly later.

Where are the opportunities hiding?

Commerce’s 2018 – 2022 Strategic Plan could be a good place to look first – but it won’t tell you much. Conducting the 2020 census is Strategic Goal #4…with only one strategy – “incorporate innovative methods and technologies in the decennial census”. Not very helpful…or detailed.

Additional temporary processing locations facilitate the decennial census, which employs more than 1M people. During the years just prior to the decennial census, parallel census offices, known as “Regional Census Centers” are opened in the field office cities. The decennial operations are carried out from these facilities. The Census Bureau also runs the Census Information Center cooperative program that involves 58 “national, regional, and local non-profit organizations”. The CIC program aims to represent the interests of underserved communities.

Response rates to censuses have been declining. Census is looking to GovCon to assist them in a nation-wide communications and partnership campaign in order to motivate people to respond. Advertising will make heavy use of digital media, tailoring the message to the audience.

The agency also faces challenges staffing the program management office that oversees the contractor’s integration efforts. In June, Census told GAO that 33 of the office 58 positions were vacant, and that it had only made two new hires since October 2017.

It’s estimated that Census will spend almost $5B on IT-related expenses for the 2020 census. Census will rely on 52 new or legacy systems to get the 2020 job done, but FedGov watchdogs are saying that not enough is being done to make this critical IT task a success. Last week, GAO released yet another report on the 2020 count, concluding that despite progress, “the Bureau continues to face significant challenges and risks in its efforts to manage the schedules, contracts, costs, and cybersecurity of its 2020 Census systems.”  IT might have the most funding, but as we all know, “Mo’ Money Mo’ Problems”:

Census is a classic case of being all dressed up with nowhere to go. With shrinking support and infrastructure, still being under contracts from the last two decennial censuses, and lack of leadership, the Census Bureau simply does not have the ability to solution their many problems. That’s where you come in, GovCon. Consider this your call to action. If your company is able to solve their pain points, we encourage you to reach out with a white paper. 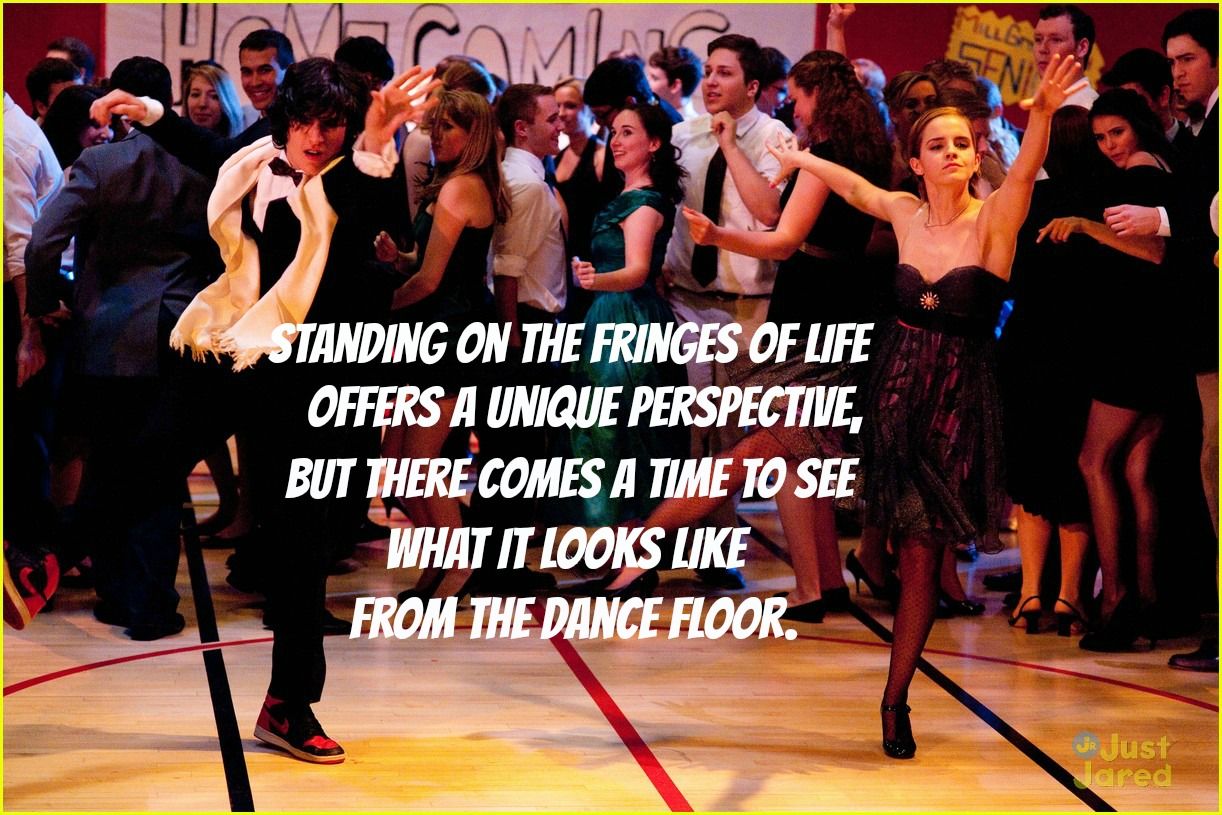 He may not be the cutest boy at the dance, but Census potentially has ~$2.3B (and counting) to offer GovCon over the next two fiscal years and they need help spending it…correctly. We here at The Pulse encourage you to analyze their problems, reach out your hand with a solution, and pull Census out under the disco ball and onto the dance floor.