The General Services Administration (GSA) is everyone’s favorite love-to-hate “mission enabler,” charged with “delivering the best value in real estate, acquisition, and technology services to Government and the American people”. Founded in 1949, the GSA was created with the intention to streamline the administrative work of the federal government. However, over the past 68 years, we have seen GSA’s area of responsibility morph into monstrous proportions. Even though they have had some pretty public struggles lately (such as botched FBI HQ search, omitting LGBT people from their non-discrimination rules, and being sued over access to Trump hotel records) – GSA is going “all in” on their push to become the Frankenstein of GovCon. Don’t believe us?

All this being said, a monster at its core is merely the sum of its parts, so which components make up the whole of the GSA? Here’s our breakdown. The GSA is headed by an Administrator who reports directly to the President. The Administrator is supported by a Deputy Administrator and two National Services Commissioners, one for Public Buildings Service (PBS) and one for Federal Acquisition Service (FAS). In the first of a three-part series, The Pulse is focusing on the proverbial head, which sits neatly fastened by the sturdy neck bolts of bureaucracy, the FAS. 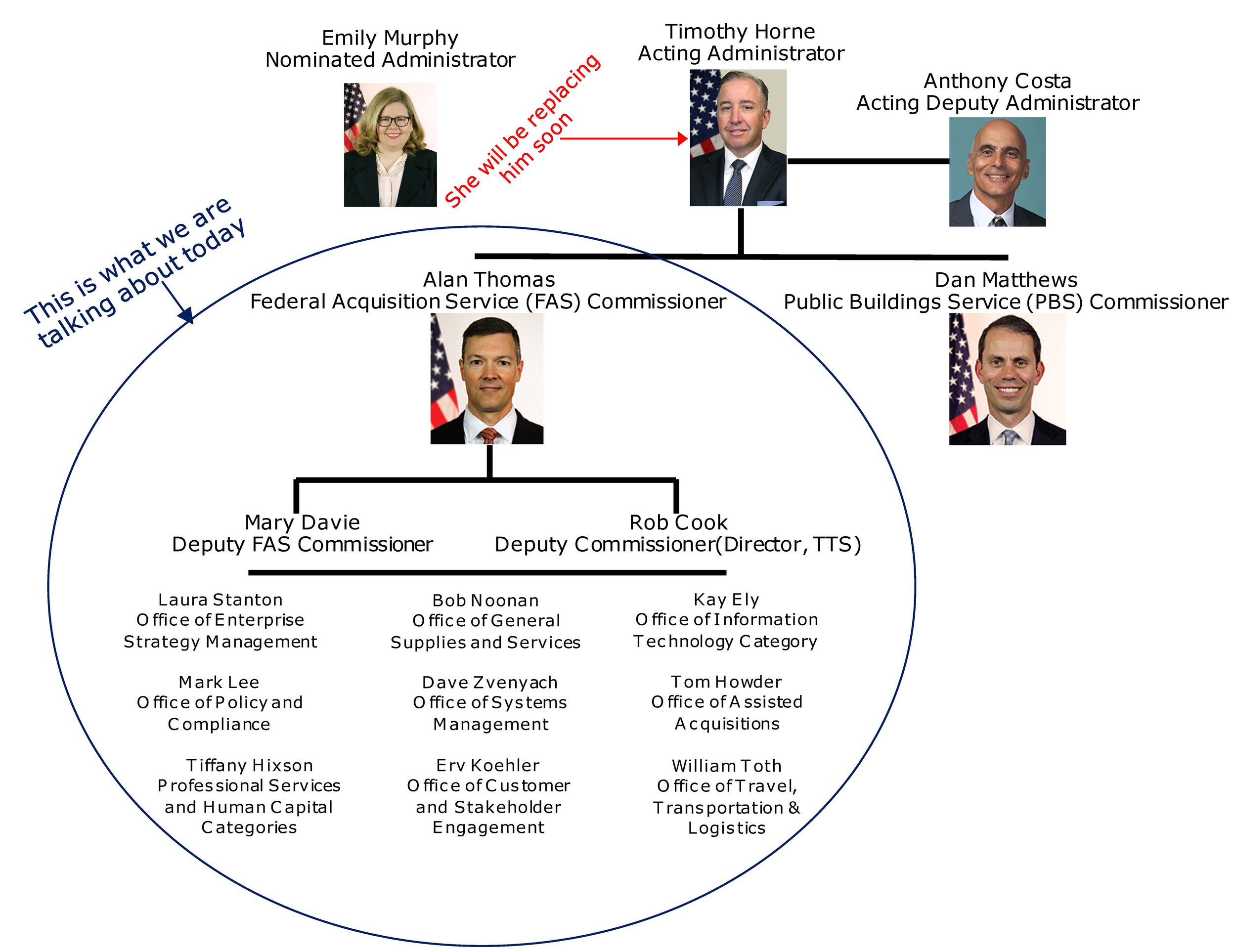 In 2007, GSA consolidated the Federal Telecommunication Service into the FAS to better align the delivery of its services in an ever-changing business world. Today, GSA FAS is arguably GSA’s biggest and most visible “arm”. GSA FAS holds the keys to the kingdom for basically everything GovCon offers with the exception of real estate:

Not bad for a “Government catch-all”. GSA FAS is steadily becoming more powerful and influential, and some fear the agency is becoming too bureaucratic. Politicizing GSA could bring massive consequences with impacts to Government-wide procurement policy and the overall acquisition process (RE: the “Amazon Amendment”). This fear was sparked by the first ever political appointment of GSA FSA Commissioner which was directed by the White House. A job previously sanctioned as “career level”, Mr. Alan Thomas was appointed in June 2017, replacing long-time Commissioner, Mr. Tom Sharpe.

“This could raise concerns in any administration, but for me, it’s downright frightening in this administration. President Trump has the ability to fire the FAS commissioner at the same time that he has pending business at GSA, existing contracts with federal agencies and continues to receive income from other federal investments with his business partners,” said Rep. Gerry Connolly (D-Va.), who added that his concerns were not specifically directed toward Thomas. “This is not about you personally. It’s about ensuring that you and any commissioner who follows is protected from the political process.”

And this fear isn’t unwarranted in today’s political climate. Increased White House oversight could lead to less emphasis on public accountability, which may trickle down to unexpected areas within the procurement process. For example, GSA is obviously a huge proponent of vehicles, and agencies across the Government landscape use them on a daily basis. However, when asked if there was currently a policy on keeping agencies accountable for knowing the requirements under these vehicles, the Commissioner gave an unsatisfactory answer. He cited that they have 250 people on overhead JUST to go out and train folks on vehicle minutia, who are there purely as a service for customers to learn how to buy on schedules. The Pulse did some digging on this to see how much GSA is spending on training and here is what we found: In 2017, GSA has apparently only spent $271K on training. That is only 27% of the total 2016 spending which was $7.566M. $217k to cover training for 31 GSA FAS schedules that generated $31B just in one year alone seems pretty cheap if you ask us.

Mr. Thomas has also publicly expressed that he’s been meeting the community within Government and GovCon industry across the region, as seen here in his Government Matters interview. He describes the strategic planning goals for GSA FAS in the coming year and having had the pleasure of attending one of these industry events (that’s right, we are among you!) we can confirm that these goals are being communicated consistently across the board.

Our Point: Consistency is a positive descriptor for an entity led by a political appointee, especially one who aspires to make impactful (and revenue generating) changes while simultaneously carrying massive responsibility. However, a consistent message without consistent substantiation leaves too much to the imagination. The Pulse has been busy in the “laboratory” searching for connections and validations taking place today in the GovCon industry.

Below we list the GSA FAS goals as outlined by the Commissioner, but our real question is this: Is the GSA equipped to meet these goals, and how can you (the contractor) spot potential opportunities to help leaders achieve them.

Consolidation is the name of the game at GSA FAS—namely the consolidations of business systems (IT Modernization) and procurement vehicles.

Business System Consolidation and IT Modernization: Currently, GSA FAS uses 170 different business systems. These business systems are not centrally linked, and therefore do not adequately talk to each other. This forces end-users to employ workarounds just to get through their day-to-day. GSA has expressed their interest in providing better service to their customers, starting with this consolidation effort and ending with a domino effect of external impact. This is an admirable thought, considering GSA FAS does not have a designated CIO. However, we have seen market research pouring into this as well as movement in legislation. Market research and legislation are great, but the real test will be what comes out of appropriations and the FY18 budget language.

Contract Consolidation: In their FY16 Government-wide Category Strategic Plan for Professional Services, GSA FSA stated that in FY17 they aimed to reduce the number of duplicated contracts by 20.9%. They found 52K stand-alone orders across almost 25K different contracts. If the data is correct, GSA intended to eliminate ~5.2K professional service contracts by FY17. Now, all we can know is what we see, and what we’re seeing is that sole-source contracts are becoming bigger in the GovCon world again. GSA eBuy selling is up, and the push for sole sourcing is still alive despite some media sources are saying it is dead. Don’t call it a comeback, it’s been here for years…just now it’s being driven by OFPP and using a new name, “BIC”.

GSA FAS has been working to make RFPs more transactional.

Cut to a year and a half ago when the effort entitled “Making it Easier” appeared on the scene. The Making It Easier (MIE) Campaign was released in April 2016 as a series of new tools to help vendors and startups do business with government more easily. They aspire to achieve more of a “Turbo-Tax experience” for contractors to respond to RFPs, with their main goal being to change the way they interact with purchasers. Their answer to purchaser issues is specifically the FAST Lane and IT Schedule 70 Springboard. The first one existing to get suppliers onto IT Schedule 70 in half the time, and the latter giving new companies an alternative to the two-year professional experience requirement generally mandated for getting on to a schedule.

GSA and the rest of the Federal world are rushing to research, develop and implement (better, updated, current, whatever) Federal IT supply chain security. With repeated cyber intrusions into critical infrastructure systems, GSA is panicking to find the cure. In “Kay’s Blog” (that is Kay Ely, Deputy Assistant Commissioner of ITS) Shon Lyublanovits (Director of the Security Services Division) outlines how GSA FAS intends to meet the specific challenges by enhancing IT procurement through sound policy drives and comprehensive SCRM cybersecurity regulations and requirements. And it all comes full circle to goal #1. And maybe we’re already seeing movement on this issue, but again, old habits (and lack of talent and a small Congressional push to create a monopoly) die hard.

Mary Shelley’s Frankenstein emphasizes the flaws behind blind ambition, such as in the ever important line:

It is (more or less) this level of progressing wildly beyond intended limitations where we find the GSA FAS today—fully capable of greatness, but more or less falling victim to the fatalism of progress without infrastructure.